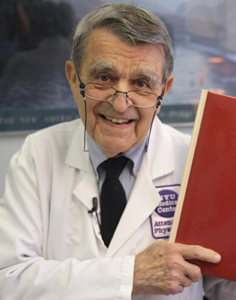 From 1984 to 2006, Dr. Sarno wrote four books about a variety of pain disorders that he named Tension Myoneural Syndrome (TMS).

Tension Myoneural syndrome is a disorder, in which powerful repressed emotions initiate a process that produces physical pain and other symptoms. Dr. Sarno’s theory suggests, that the unconscious mind uses the autonomic nervous system to decrease blood flow to muscles, nerves, and tendons, which results in micro-oxygen deprivation, which is experienced as pain in the affected tissues.

Sarno states that the underlying cause of the pain is the mind’s defense mechanism against unconscious mental stress and emotions. The mind sees feelings such as (but not limited to) intense anger as dangerous, and therefore prevents those feelings from reaching conscious awareness. For example, a person may repress tremendous anger towards his employer because if it were felt and expressed, he would risk losing his job. Such an employee with TMS may develop migraine headaches or sciatica that assists the unconscious repression of their rage by distracting them with physical pain.

Dr. Sarno believed that when patients recognize that the symptoms are only a distraction, the symptoms then serve no purpose, and they go away.

At Azamra Acupuncture, we take the process one step further by using proven methods to bring those unconscious feelings into awareness, negating the source of the pain.