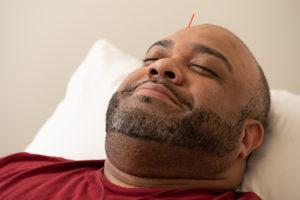 is a rich history, dating back over 2,000 years, of Chinese Medical literature about treating emotional disorders with acupuncture. Over those 2,000 years, and with millions of case studies and records of the best doctors in each generation, proven techniques have been discovered to assist in the processing and management of feelings such as anger, sadness, hyperactivity, fear, and obsession.

Ancient Chinese metaphysics describes the Universe as a fabric in a constant state of change between Yin and Yang energies. These Yin and Yang energies can be further classified into five metaphorical elements which describe all phenomenon in nature. These are: Fire, Earth, Metal, Water, and Wood.  Ancient Chinese psychology uses these elements and their traits to describe five personality types and psychological dispositions. For example: Fire dissolves boundaries and can’t be contained. Healthy Fire Personalities are social butterflies that define themselves through their relationships, bringing down barriers between themselves and others. They are full of charisma, charm, and warmth. A person with deficient fire energy may have social anxiety and difficulty connecting with others. Excessive fire energy will manifest in hyperactivity and enthusiasm at inappropriate moments. 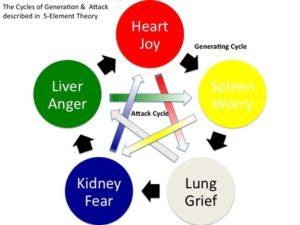 In Chinese Medicine, we treat emotional disorders through regulating the relationships between the five elements. For an Excessive Fire disorder (hyperactivity/mania), we use acupuncture to strengthen the element of water (isolation, thoughtfulness, careful planning) which controls fire. For a deficient fire disorder, we may strengthen the wood element (pursuing goals and taking action), which generates fire. For someone suffering from deficient earth (lack of connection community, giving and doing for others), we can strengthen fire (joy and charisma) to generate earth.  For someone suffering from an overabundance of metal energy (excessive rigidity and perfectionism), we strengthen fire (joy and charisma) to control the metal.   Sounds confusing? It is! But when applied correctly, it works. Each of the 12 acupuncture channels has a corresponding element. On each channel there is a point that corresponds to each of the 5 elements. To treat our patient with the excessive fire personality, we can perform acupuncture on the water points of the fire channels to cool the fire, or the earth points of the earth channels to promote the transformation of fire into earth energy. If the patient seems to lack water traits (thoughtfulness, carefulness, planning), we use the strengthening water method. If the patient seems more deficient in earth (awareness of others and giving), we strengthen the Earth channels.

This may sound unscientific, and it is. There are no instruments that can measure and quantify the amount of “fire energy” in a person. The treatments are based on Ancient Chinese Metaphors used to describe the psyche and the universe. We don’t know how they work scientifically. However, there is a reason that these treatments have been used by the greatest Doctors of Chinese Medicine in every generation and are still common today. That reason is precisely because they work.